As Donors and as Causes, Women are Taking the Lead in Philanthropy

7 March 2019 at 8:02 am
Kate Pew Wolters
The movement we are seeing today of women as leaders and funders is the outcome of decades of women’s leadership in philanthropy, not a sudden phenomenon brought about by political and cultural change, writes Kate Pew Wolters, as part of the Dorothy A. Johnson Center for Philanthropy 11 Trends in Philanthropy for 2019.

Print
As Donors and as Causes, Women are Taking the Lead in Philanthropy
7 March 2019 at 8:02 am

The movement we are seeing today of women as leaders and funders is the outcome of decades of women’s leadership in philanthropy, not a sudden phenomenon brought about by political and cultural change, writes Kate Pew Wolters, as part of the Dorothy A. Johnson Center for Philanthropy 11 Trends in Philanthropy for 2019.

Women have dominated staffing numbers in foundations and not for profits for decades, and today, the number of women who are taking on roles as institutional leaders and major donors is on the rise.

Yet the international spotlight that seems to be falling on women and girls’ causes around the world should be understood more as a blossoming of what’s been happening within philanthropy for generations, than as a wholly new trend.

As the W.K. Kellogg Foundation’s 2016 report Women’s Philanthropy points out, much of this growth in philanthropic power derives from the simple fact that more and more women have their own money to spend. Women are gaining higher paid professional positions and finding success as entrepreneurs. They also stand to be the primary beneficiaries of the $59 trillion wealth transfer that has already begun within US family philanthropy. With greater financial heft behind them, these women and others are making choices that often put (or keep) women at the center of their giving.

Philanthropy’s focus on women and girls has been increasing dramatically since the women’s equity movement began in the 1970s, nearly five decades ago, and that focus has steadily translated into giving ever since. In 2016, the W.K. Kellogg Foundation identified international giving from 62 different funders in this arena, totaling $62.7 million; $52.6 million of which was given in the United States.

That said, social change movements like #MeToo and today’s political climate are drawing more attention from individual and institutional donors alike. The TIME’S UP Legal Defense Fund, launched by a group of women philanthropists in January 2018 to support women coming forward with #MeToo claims, is a prime example: donors have already pledged over $22 million to this cause.

On the high end, Women Moving Millions, an international group of donors at the $1 million and above level, is an example of how women’s long-term leadership in philanthropy is bearing fruit. Founded in 2007 by the Hunt sisters, Helen and Swanee, Women Moving Millions continues to challenge philanthropy to raise the bar on giving to women and girls. As a result of their efforts, more than 300 members have pledged over $650 million in donations to women-focused causes and organisations globally.

Women have also been the earliest and most eager adopters of the Giving Circles model –  dating back to the 1980s. Often described as “the democratisation of philanthropy,” Giving Circles continue to give many women and first-time philanthropists a seat at the table and an intimate view of the giving process. Giving Circles owe their popularity today in large part to the efforts of thousands of women who have used this model to maximise the impact of their giving and their collaboration.

Grantmaking to projects and programs affecting women and girls, like most things, reflects the changing nature of our times. Today, we see grants around empowerment for women and girls, access to health care, wage equity, and advocacy, and it is quite likely that giving to support gender equity will continue to increase. With women leading 44 per cent of the top 25 largest foundations, these voices will most certainly be heard loud and clear.

In the end, women as leaders, as funders, and as advocates will continue to change the landscape of the philanthropic community in the near future and in decades to come. But the movement we are seeing in this space today is truly the outcome of decades of women’s leadership in philanthropy, not merely a sudden phenomenon brought about by political and cultural change.

The proof – and perhaps natural progression – of their effectiveness will be in increased economic self-sufficiency for women, improved health and health access, and more women in elected positions.

About the author: A trustee of the Grand Valley University Foundation since 1992, Kate Pew Wolters was one of the first two recipients of the Leadership Award in 1989. She continues a long family tradition of support for Grand Valley, most recently joining her father in a landmark gift for the Shaping Our Future campaign that honours her mother, the Mary Idema Pew Library Learning and Information Commons. Kate is also a member of the board of directors of Steelcase Inc. and chair of the Steelcase Foundation. She is president of the Kate and Richard Wolters Foundation. She is involved with the Progressive Women’s Alliance of West Michigan and Michigan Protection and Advocacy Service, and is co-chair of the Kent County Children’s Commission. 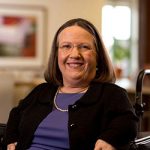 Kate Pew Wolters is president of the Kate and Richard Wolters Foundation.