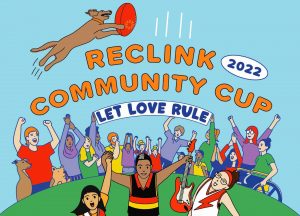 After the recent news that the Reclink Community Cup – the hot head-to-head between community radio giants, the mighty Megahertz (Triple R 102.7FM & PBS 106.7FM) and the ruthless Rockdogs – will return to Victoria Park, Abbotsford on Sunday 19 June after a two-year absence, the event theme and lineup has now been revealed.

In honour of distinguished Gunditjmara/Bundjalung singer-songwriter Archie Roach AM and his extraordinary and enduring musical and charitable contributions over the decades, the theme for the Cup’s 26th instalment is ‘Let Love Rule’ – a title taken from his seventh studio album and song of the same name.

Meantime, the list of musical acts is as impressive as the big game itself. The artists set to conquer Victoria Park’s main stage include the formidable Cash Savage and the Last Drinks, who’ll be ducking into the grounds to perform at the Cup between their busy international touring schedule.

Elsewhere, Melbourne’s rock’n’roll heroes with a punk-rock heart Private Function will bless the Community Cup stage after selling out the Forum last December, while wonderous four-piece Parsnip (who recently supported the OG Wiggles) will charm Community Cup crowds with their synth-laden pop-rock tunes.

With members hailing from Guinea, Mali, Senegal, Cuba and Australia, the exceptional nine-piece ensemble Ausecuma Beats will share their intoxicating grooves and joyous energy with the Cup’s crowd, with Cairns-bred, Melbourne-based neo-soul outfit Izy rounding out the bill.

The event theme, ‘Let Love Rule’ isn’t just a tribute to Archie and his music, but also a celebration of love, connection, and a community reuniting for the adored family-friendly footy affair after a tough few years.

About the Reclink Community Cup: The Reclink Community Cup is a much-adored annual charity football match that pits musicians against media industry staff. Since 1993 the Melbourne Reclink Community Cup has attracted the who’s who of the radio and music industries that give their time (and bruises) to raise awareness and funds for Australia’s most disadvantaged. From humble beginnings in 1993, the Melbourne event now attracts more than 12,000 people and raises much-needed funds for Reclink Australia. The event’s success has been replicated in Sydney, Adelaide, and Fremantle since 2015, with Hobart and Brisbane joining the party for 2016 and Canberra in 2017.

Coast Shelter based in Gosford, NSW, is seeking 2 volunteer ...