19 November 2015 at 9:32 am
Kate Brooks
Young Australian human rights law student Kate Brooks is tracing the journey of thousands of Syrian refugees arriving on Europe's shores. While heading back to her home base in Paris, the terror attacks occurred. Here’s her latest Blog - Même Pas Peur - Not Afraid!

Young Australian human rights law student Kate Brooks is tracing the journey of thousands of Syrian refugees arriving on Europe's shores. While heading back to her home base in Paris, the terror attacks occurred. Here’s her latest Blog – Même Pas Peur – Not Afraid!

It seemed like no one on my bus to Belgrade spoke English, but I picked up that the word refugee is not used much by the Serbians, “they” are all “immigrants”, said in an angry voice, showing the power of language in labeling someone as undeserving.

And it’s clear that, as in Australia, many Europeans don’t believe refugees have a right to be here.

I am an immigrant. I left my wealthy, stable, safe country to live and work in another because I wanted to experience something different. I had no well-founded fear of persecution, I could have found a better paid and more secure job in Australia than I found here. But no one in Europe has ever questioned my right to be here. No one has ever accused me of taking someone else’s job. And as far as I know, no one has ever worried that I might be a threat to national security.

Every single refugee I spoke to loved their home. Every single one of them spoke of the beauty of their country and said they would go back if they had a future there. We are wired to want to return to where we are from. Every Christmas I go home, because it gets to November and I’m itching to be where I’m from again. For these people, going home is not an option.

I was sitting in my hotel in Belgrade when news of the terrorist attacks in Paris came through, and like everyone who calls that city home I felt sick to my stomach, and wracked with nerves until one by one everyone there who I loved turned out to be ok.

There’s really nothing more terrifying than the thought of not feeling safe where you live, and the French have had a taste of that in the last few days. The difference is that for the majority of refugees, they do not have a government who will act to protect them, who will do whatever it takes to ensure their future safety. For some of them, it is the government targeting them. They are not running from an attack on a stadium, or a nightclub, or a restaurant, or a bar. Their villages, cities, and in some cases their countries, are on fire.

We all empathise with the images coming out of France that show people terrified and fleeing. We can all understand that when you hear gunshots and comprehend the threat, you grab the people you love and you run. You run away from the danger, and you keep running until you find protection and feel secure.

Refugees don’t get to just run out of the restaurant; they have to run further and faster and for longer until they feel safe. Why is it that we don’t look at the images of people running from war and make that correlation? There was not one story of someone slamming their door in the face of Parisians who ran on Friday. Why can we not #PorteOuverte now?

While I’ll acknowledge that I met some who weren’t running from obvious persecution, the idea that these people are to be feared is something that I understand less now than I did two weeks ago. That the man or woman who comes from a different background is someone you are justified in being afraid of because they are different to you makes no sense.

We make these people “the other” because it allows us to feel safe in our bigotry and more comfortable in our ignorance. Obviously I didn’t talk to every refugee, but these people don’t want to blow up your homes and change your way of life. They don’t want to convert Europe or threaten your children. They don’t want to impose some deranged form of Sharia law. What they want is the same things you do. They want to send their kids to school, finish their own education, get a job, and be able to feed their families. They want to be free and to live without fear.

Almost immediately following the attacks in Paris, Poland announced that it would no longer be adhering to its commitment to accept a mediocre number of Syrian refugees under a previously negotiated EU deal. Hungary is likely to follow. Calls in the US and Australia to halt any intake were loud. As if the two issues were automatically linked. Despite the fact that the vast majority of these perpetrators were European citizens, born and bred here, in our schools, our suburbs and our communities.

But when it comes to the refugees, I am not afraid of them. I’ve helped these people out of leaky boats. I’ve comforted them while they’ve howled violently. I’ve walked to border crossings with them in the pitch black. I’ve sat in the dirt and talked with them in their camps. I’ve travelled across a country with them. I’ve shaken their hands and heard their stories and shared their food. I’ve been alone with them in the dark.

And if I’m not afraid of them after that, then you don’t get to be either.

About the author: Kate Brooks currently works at the OECD as a Communications Officer and she is halfway through an LLM in International Human Rights Law with the University of London. She says her work in tracing and documenting the experiences of people displaced from their homelands is in a bid to change the rhetoric about refugees. Follow her journey here. 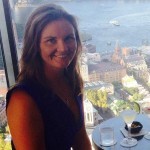 Kate Brooks currently works at the OECD as a Communications Officer and she is halfway through an LLM in International Human Rights Law with the University of London.