No Pathway to Release

20 February 2017 at 10:33 am
Patrick McGee
The justice system doesn’t know how to respond to disability, particularly for Indigenous Australians, writes Patrick McGee who addressed the inaugural Australian Lawyers for Human Rights National Human Rights Conference in Melbourne on Friday.

People with cognitive impairment and, most particularly, Aboriginal and Torres Strait Islander people are significantly overrepresented in Australian prisons. Detained indefinitely without a conviction, and with no pathway to release, the current system is woefully inadequate.

The Australian Human Rights Commission found in one well-known case, that of Malcolm Morton, that the conditions of detention he faced “amounted to cruel, inhuman or degrading treatment”.

Marlon Noble’s name is also well known, having spent an appalling 10 years in a WA prison without conviction. Their cases, however, are far from unique.

An estimated 150 people with cognitive impairments are currently detained under Mental Impairment regimes across the country.

Once a person is found unfit to plead, they can be kept in custody for an unlimited period of time and presumed not mentally fit to stand trial until the contrary is found. In the meantime, they have no ability to exercise their legal capacity before the courts. Furthermore, in order to bring their incarceration to a close, there must be an assessment of the risk of harm to self and others and the provision of a safe place to live in the community.

When incarceration typically amounts to exclusion from vital services and networks, and where mental capacity precludes self advocacy, what hope is there of release?

The stark reality is that some people with cognitive impairments are incarcerated for longer periods than they would have been if they had in fact been found guilty of a crime. And all because the system doesn’t know how to respond to disability.

According to the Australian Law Reform Commission, one of the reasons for unfitness to stand trial laws is that “the integrity of a criminal trial (and, arguably, the criminal law itself) would be prejudiced if the accused person does not have the ability to understand and participate in a meaningful way”. Certainly the intent of the law was to protect accused people with disabilities and divert them to relevant treatment. In practice, however, findings of unfitness to stand trial can lead to “extreme and inequitable outcomes”.

The end result of deeming someone “unfit to plead” is often society’s most vulnerable being left to languish in prisons across the country. There’s nothing protective or humane about that, and what it tells us about disability in the justice system is that it has, for too long, been filed under “too hard”.

It’s an indictment on our nation that people with a disability cannot expect to experience fairness in the Australian justice system. Not to mention it being a human rights violation.

Every effort needs to be made by the Justice System to include people with disabilities in the justice process and to ensure that – where they cannot participate because of their impairment – the matter is not a legal issue but a social issue, and should have a social response.

It’s abundantly clear that people with an intellectual disability or mental illness should be supported in a suitable, secure place, rather than being incarcerated in a punitive environment. Instead of exacerbating mental illness or creating emotional disruption, our focus must be on providing therapeutic interventions in an appropriate setting.

While we fail to do so, we’re perpetuating the “out of sight, out of my mind” social mentality that has plagued people with a disability throughout history.

There is, however, light at the end of the tunnel. The National Disability Insurance Scheme Justice Interface Principles dictate that supports for challenging behaviour will be funded both in custody and in the community. Crucially, the Senate report into the issue didn’t shy away from identifying huge problems and called for urgent reforms to the system.

We can see progress happening, but the wheels turn slowly. More slowly still from in the inside looking out.

About the author: Patrick McGee is the community advocacy and support manager with Endeavour Foundation and coordinator of Australians for Disability Justice. He addressed the inaugural Australian Lawyers for Human Rights (ALHR) National Human Rights Conference. 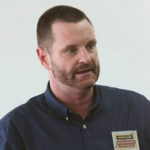 Community advocacy and support manager with Endeavour Foundation and coordinator of Australians for Disability Justice.