7 July 2017 at 4:40 pm
Maggy Liu
Following a new relationship between Deaf Children Australia and YMCA, a team of deaf and hard of hearing young people have debated a bill about how public transport can be made more accessible for people with disabilities, writes Maggy Liu, a youth press gallery journalist for Youth Parliament 2017.

Following a new relationship between Deaf Children Australia and YMCA, a team of deaf and hard of hearing young people have debated a bill about how public transport can be made more accessible for people with disabilities, writes Maggy Liu, a youth press gallery journalist for Youth Parliament 2017.

A team of six passionate young people from the deaf and hard of hearing community have helped secure a significant win in the fight for more accessible public transport in Victoria.

Among other improvements, the self-titled Deafhood team advocated for live captioning of important information such as delays, safety messages, emergency warnings and urgent announcements on all trams, trains and stations.

Although this service does exist in certain areas, the team wanted it to be widely accessible and regularly maintained across Victoria to make travelling on public transport a safer and smoother experience for the deaf community.

They see this as an important way to combat discrimination and achieve equality for their community who deserves the same rights to access information as the wider population.

Team members implored other Youth Parliamentarians to imagine what it would be like to be deaf and unable to travel independently with confidence, having to either be forced into heavy reliance on others or isolation from being unwilling to use the services.

Another reason the team passionately fought for their bill was because they believed it would not only benefit the deaf community but also assist Victoria’s ageing population and foreign travellers, who are not familiar with English as their first language, to commute with more ease.

Unsurprisingly, the bill passed unanimously and the debate concluded with hugs and tears from family and friends who came along to support their journey.

Reflecting on the experience, Te Rata Williams, a member of the team said: “We’re all so proud of all the work we’ve put into this, leading up to today. I just really want to applaud everyone and we are so appreciative of everyone’s support as well.”

Olivia Beasley, fellow team member agreed, believing Youth Parliament had helped her realise that: “We’re not alone, we don’t have to just advocate for ourselves, the wider community will step up and help us to reach the same goals.”

Cate Dunn, another member of the team summarised that the highlight of her experience was “being part of this process and meeting all the 120 people who are part of the parliamentary group who have been so supportive from such a vast array of backgrounds and cultures”.

“We’re all in this together regardless of where you come from, your culture or background, we could all get along and we all belonged to this big family,” Dunn said.

Along with other successful bills from Youth Parliament, the bill from the Deafhood has been handed over to Minister of Youth Affairs Jenny Mikakos, for further consideration.

Several Youth Parliament bills in the past have set the precedent for creating legislative change such as the over-the-counter availability of the morning after pill and compulsory helmets for bike riding.

The Deafhood team hopes their bill will also be implemented and will continue their advocacy beyond this event.

A big thank you to wonderful interpreters from Echo for helping facilitate the interview.

About the author: Maggy Liu is a youth press gallery journalist, and a second year Bachelor of Arts student at the University of Melbourne majoring in media and communications, and sociology. More of her writing can be found at www.maggyliu.com 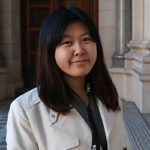