Print
How Dimming Lights To Save Turtles Can Teach Us To Live And Build Sustainably
1 August 2017 at 3:43 pm

Growing forests isn’t only about the environment; it’s about growing communities and economies as well, argues Wayne Wescott, CEO of environment not-for-profit Greenfleet.

While most people agree “investment in the environment” is a good thing, it’s all-too-often treated as a fringe issue – something to be legislated at loggerheads with economic development, employment or social benefit. Is it core business, some people may ask?

It’s time we started looking at environmental projects on their merits, because when we move past the idea that we must steal resources from one area to improve another, we can unlock truly coordinated approaches. A rising tide lifts all boats.

The good news is that this is already happening. Current projects around Australia are demonstrating how partnerships with community, government and business can work together to improve environments and economies at the same time.

Take Greenfleet’s Great Ocean Road Restoration Project along Victoria’s south coast, for example. This month, a new forest – 14,000 trees – is being planted at Johanna Beach. The forest will capture more than 11,000 tonnes of carbon out of the air over the next 30 years (it’s protected for that period, so it will be there at least that long). It will also improve water quality and provide new habitat for native animals, including koalas.

It’s a similar story in Queensland’s Bundaberg region, where planting of natural forests is working to save the local turtles.

The Barolin Nature Reserve backs onto Mon Repos Conservation Park, a regional park with the largest concentration of nesting marine turtles on the eastern Australian mainland. Mon Repos is the most significant loggerhead turtle rookery in the South Pacific, and a key global nesting area for the vulnerable green turtle. Loggerhead turtles are listed as critically endangered in the region and the success of nesting and hatching turtles at Mon Repos is critical for the survival of the species.

The turtles return to Mon Repos each year to lay their thousands of eggs. It’s always been fraught, as extreme weather and hungry foxes mean only a small minority ever survive.

Today, a new threat presents itself: artificial light. Once hatched, the turtles must find their way out to sea, and they follow the lowest brightest horizon they can see. With the bright lights of human civilization, the hatchlings become disoriented. The urban glow leads some inland, away from the safety of the sea. It’s a classic case of humanity accidentally disrupting the complex ecosystem next door.

This is where, stereotypically, battle lines would be drawn. You can picture it, can’t you? Two sides would form, one for turtle welfare, one for development. Both would stridently argue the merits of their case from an assumption that their positions were mutually exclusive. You’re either for the environment or you’re for the economy. Choose a side –  people or turtles.

In Bundaberg, just like in Johanna Beach, work is underway to bring these two sides together.

Firstly, Greenfleet planted 80,000 trees in the Barolin Nature Reserve, which will grow into a ‘green curtain’ to help screen the light while capturing more than 50,000 tonnes of carbon over 30 years. Bundaberg Regional Council has legally guaranteed the trees will remain at least that long, and more plantings are planned.

A ‘low glow’ campaign is also being developed to reduce the impact that lighting is having on the turtles. It’s not about communities deferring to nature’s needs – it’s about making our cities smarter. We are developing a better understanding of the ways humans in urban areas interact with nature and use lighting at home and outdoors, including street lighting and carparks. Technology is providing new options, with a focus on low spectrum lighting, better shielding of streetlights, use of sensors and remote management of lighting.

Like the Johanna Beach example, the Bundaberg project will attract tourism and tourist dollars by beautifying and future-proofing an area visited by upwards of 30,000 people a year. It also created new job opportunities for members of the Gooreng Gooreng people, the traditional owners of the land.

These projects that started with planting trees and protecting turtle habitat are achieving so much more than improving the environment. Yes, they are capturing carbon and combating climate change, but in ensuring the area’s sustainable future, reforestation is providing employment and economic benefits too. In enhancing these areas, the projects are securing valuable tourism industries. By linking to city planning and lighting, we are also driving technological innovation.

Importantly, projects like these provide people at all levels with clear, pragmatic ways of connecting with nature – whether they are managing big corporates or their own backyard. If that’s not core business for Australia, I don’t know what is.

About the author: Wayne Wescott is CEO of Greenfleet a not-for-profit organisation dedicated to connecting people with climate action. 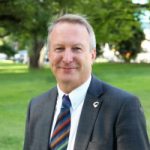