9 January 2018 at 9:37 am
Martin Laverty
With charities having to depend more on government and customers, and less on donors, the charitable sector is facing a big transition, writes Royal Flying Doctor Service of Australia CEO Martin Laverty.

With charities having to depend more on government and customers, and less on donors, the charitable sector is facing a big transition, writes Royal Flying Doctor Service of Australia CEO Martin Laverty.

“It’s not about us. It’s about them.” This may explain the Charity Reputation Index recently ranking the Royal Flying Doctor Service (RFDS) Australia’s most stable, robust and reputable charity.

“Them” are residents of country Australia. They see doctors at half the rate of city people. In emergencies, some country people are thousands of kilometres from hospital.

Yet because Australians believe in a fair go, they don’t want “them” to forgo health care. The RFDS flies in, and increasingly drives in, health care to the bush when it’s needed. It’s likely for this reason Australians have for seven years in a row expressed their trust in the RFDS.

The 2017 AMR annual Charity Reputation Index reveals dozens of health care charities play central parts in the lives of Australians – National Heart Foundation, Cancer Council Australia, and Diabetes Australia. Half the list of Australia’s most reputable charities have health as their mission.

That so many health care charities rank high is significant. It suggests access to health services remains, at the end of 2017, a key concern to Australians. It suggests voters know governments do not do enough to ensure health care access, which is in part why donors back health causes.

A separate report on the nation’s 54,000 charities was published in early December 2017 by the Australian Charities and Not-for-profits Commission. It showed donations and bequests to charities fell from $11.2 billion to $10.5 billion last year. Yet overall revenue was up to $143 billion.

The increase in charity revenue comes from both government grants and charities selling their services to governments or individual citizens. With charities having to depend more on government and customers, and less on donors, the charitable sector is facing a big transition.

As this transition is occurring, there are three questions I’m asked most.

The first is am I a pilot. The second is am I a medical doctor. The answer to both is no. Luckily, the RFDS has almost 1,500 talented nurses, dentists, phycologists, engineers, drivers, fundraisers, administrators, doctors and pilots to care for the 336,000 people who needed us this last year.

Yet the third question I’m asked goes to the heart of the transition occurring in the charity sector. Do you get enough funding?

The answer is no. Not even close.

Rather, growing chronic illness in country areas demands more than we’re able to afford. We’d like to spend more time with country communities preventing illness before it becomes chronic or an emergency. In many cases, available dollars just don’t stretch far enough.

A stand out illustration is skyrocketing demand for mental health care in the bush. On national average, a person in an outer regional or remote part of Australia sees a mental health professional at one fifth the rate of a city person.

Attempting to bridge this gap, in the last financial year the RFDS conducted 24,396 mental health consultations, almost double the amount of the previous year.

In the year ahead, demand in the communities we serve could double our mental health service again. Right now, the dollars to meet this demand do not exist.

The RFDS is not alone. Every charity on one hand acknowledges gratitude for support of donors and governments. On the other hand, they acknowledge demand for services grows and grows.

There is a harsh reality of the transition in the charity sector. Governments, through grants, contracting, and customer purchasing arrangements effectively direct the activities of charities. This is not problematic where the charity willingly agrees.

A problem arises when charities have no spare capacity – read funding – to fill the gaps that business or government can’t.

The findings of the 2017 Charity Reputation Index however reveal Australians have deep trust in charities, at a time where trust in many of society’s institutions is in decline.

This trust meant that when most of us sat down to Christmas lunch, thousands of staff and volunteers were at work caring for those in need. The Smith Family delivered presents to disadvantaged kids. St Vincent de Paul fed and housed those who had nowhere to go.

For the RFDS, dozens of pilots, doctors, and nurses were at work, on standby to fly and drive in emergency care. Thanks for putting your trust in the RFDS once again, to allow country Australians to in turn trust the RFDS always be there when needed.

About the author: Martin Laverty is the CEO of the Royal Flying Doctor Service of Australia, and the deputy advisory board chair of the Australian Charities and Not-for-profits Commission. 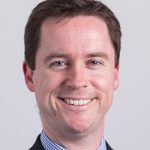 Martin Laverty is the CEO of the Royal Flying Doctor Service of Australia, and the deputy advisory board chair of the Australian Charities and Not-for-profits Commission.