23 January 2018 at 9:58 am
Seak-King Huang
Seak-King Huang, Principal at Prolegis Lawyers, explains what the proposed Electoral Disclosure and Funding Reform means and why charities and NFPs should be concerned.

Print
Electoral Disclosure and Funding Reform: An Explainer
23 January 2018 at 9:58 am

Seak-King Huang, Principal at Prolegis Lawyers, explains what the proposed Electoral Disclosure and Funding Reform means and why charities and NFPs should be concerned.

“Foreign donations ban”, “advocacy gag” and “catastrophic crackdown” have headlined many recent news and opinion pieces about the proposed reforms to the Commonwealth Electoral Act 1918 (the Act) under the Electoral Legislation Amendment (Electoral Funding and Disclosure Reform) Bill (the Bill).

In this piece, we outline why any charity (whether or not registered with the ACNC) or not-for-profit organisation who engages in advocacy should indeed be concerned about the proposed reforms.

It is established law that charities can engage in political activities. The High Court in the Aid/Watch case (Aid/Watch Inc v Federal Commissioner of Taxation 2010) held that in Australia there is no broad general rule excluding “political objects” from charitable purposes, and further that the generation by lawful means of public debate concerning, in Aid/Watch’s case, the efficiency of foreign aid directed to the relief of poverty is itself a purpose beneficial to the community.

This position was confirmed in the Charities Act 2013 which explicitly recognises advocacy (promoting or opposing a change to any matter established by law, policy or practice in Australia or another country) as a charitable purpose.

This legislation imposes only a limited restriction on charities: the charity must not have the disqualifying purpose of promoting or opposing a political party or a candidate for political office.  This is well accepted by charities; they focus on issues-based, non-partisan activities and know that if they engage in party political activities, they risk engaging in a disqualifying purpose thus jeopardising their charity status.

Additionally, the Not-for-Profit Sector Freedom to Advocate Act 2016 prohibits (and renders void) any requirement in agreements with Commonwealth agencies that restricts or prevents a not-for-profit entity from commenting on, advocating support for or opposing a change to any matter established by law, policy or practice of the Commonwealth.

The act in its current form applies to charities and NFPs who engage in advocacy and campaigning in certain situations.

In general terms, the act imposes requirements for reporting of electoral expenditure and political expenditure to the Electoral Commission (under part XX of the act) and for disclosure of the person who has authorised electoral advertisements (part XXI of the act).  In most cases, the issues-based and non-partisan approaches of charities have meant that they are not caught by these requirements.

The reforms proposed under the bill (which has been referred to the Joint Standing Committee on Electoral Matters) will have the effect of making the act applicable to many more charities (more frequently) and through onerous requirements, discouraging charities and NFPs from advocacy.  We highlight five key issues here.

A charity or NFP who is a “political actor” (meaning a political campaigner, a third party campaigner or an associated entity of a political party) must be registered with the Electoral Commission. This register will be public.

It is likely that many charities and NFPs will be caught as a political actor. One limb of the definition of “political campaigner”, would catch any entity which has incurred or authorised political expenditure of $100,000 or more in any one of the previous three financial years. The threshold for “third party campaigner” is even lower, $13,500.  Another reason why charities and NFPs will easily be caught is because of the breadth of the concept of “political expenditure”.

This is defined as expenditure for a political purpose which in turn is defined as a list of activities including the public expression by any means of views on an issue that is, or is likely to be, before electors in an election and the communicating of any matter which is intended or likely to affect voting in an election.

An activity can be caught even if an election has not been called and the view being expressed is on an issue that is merely likely to be before electors or likely to affect voting. There are only two limited exceptions to this: news and satirical, academic or artistic expressions.

A political campaigner will need to submit annual returns (which must be audited) disclosing the total amounts it has received and paid (presumably for political expenditure, although the bill does not say) in the relevant financial year (and if the amount is more than $13,500, particulars of donors also), outstanding amount of all debts, details of certain senior staff and their membership of any political party and any discretionary benefits it receives from government.  A registered third party campaigner must also lodge annual returns.

As a political actor, the charity or NFP will need to nominate a financial controller.

The bill proposes to make the financial controller personally responsible (and liable, with significant penalties including imprisonment in some cases) for a number of the obligations.  This will be a role not to be taken lightly and charities will need to re-train, re-define and potentially recruit new personnel for this role.

Donations and gifts (for political expenditure presumably although again, the bill does not explicitly say so) must be from “allowable donors” (defined to mean Australian citizens or entities).

If they are not, the donation or gift will need to be transferred to the Commonwealth or returned to the donor/giver. Charities and NFPs will need to undertake due diligence on donors and givers. Even bequestors will need to be checked.  This will have an impact on funding available to charities.

A donor to a political campaigner of gifts totalling more than $13,500 (for political expenditure presumably although again the bill does not explicitly say so) in a financial year will be required to lodge a return to the Electoral Commission.

Will donors to charities and NFPs be prepared to accept this additional reporting requirement?  We suspect many will not and this will therefore also have an impact on funding available to charities.

The financial controller will need to keep certain prescribed records. For example, if loans of more than $13,500 are taken by a political campaigner (again presumably for political expenditure although in this instance also, the bill does not explicitly say so) the loans must be from a financial institution otherwise the campaigner will need to keep records (including names and addresses of certain personnel of the lender).

There is no doubt that the bill proposes a number of onerous and costly new requirements on charities and NFPs. Additional red tape is an apt description; red-tape that would discourage if not prevent charities from activities they are currently permitted by law to engage in.

The proposed reforms fly against the view that advocacy actions of charities, often in areas and on topics which draw significant interest from public and parliamentarians, are not and should not be treated as “political acts”.

The deadline for submissions on the Bill to the Joint Standing Committee on Electoral Matters is 25 January 2018.

(In writing this, I am grateful for the assistance of Rachel Djoendy).

About the author: Seak-King Huang has over 25 years’ experience as a lawyer. Prior to joining Prolegis Lawyers, Seak-King was general counsel and company secretary of World Vision Australia and before that, a partner with a major commercial firm. She brings to Prolegis expertise in governance and the functioning of boards, charity status and tax endorsements and funding relationships (ranging from grants from governments, multilateral organisations and other bodies, general public and philanthropic donations and partnerships, and the newer models for financing social good). She is also experienced with project implementation, including unique ones involving social enterprise and the commercialisation of sustainable activities. Seak-King also brings substantial experience with the range of commercial service relationships and contracts typical for charities and not-for-profits. Seak-King is a graduate member of the Australian Institute of Company Directors and is currently on the boards of Light Melbourne and Anglican Overseas Aid. 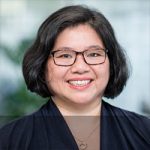