Australia’s UN Report Card: Making Progress, But Could Do Better

Visiting drought-affected farmland in New South Wales last week, new PM Scott Morrison said he was not interested in considering the role of climate change on the drought because he was “practically interested in the policies that will address what is going on here, right now.”

A narrow focus on the short term is common in politics, but it won’t make the long-term problems go away. Drought and other issues like inequality, housing affordability, obesity and the loss of Australia’s rich natural heritage will only get worse.

The UN Sustainable Development Goals adopted by Australia and all nations in 2015 are a way to help countries focus on these longer-term challenges. They are a set of goals and targets for economic prosperity, social justice and environmental sustainability to be met by 2030.

In addition to governments, more and more businesses are now reporting on their progress towards these global goals, too.

How is Australia going?

The report highlights strong progress in health and education, but poor performance in addressing inequality, climate change and housing affordability. Of 144 indicators assessed across the 17 goals, 35 per cent were on track, 41 per cent needed improvement and 24 per cent were off-track or deteriorating.

Despite some progress, the report found almost every goal has at least one target where an important indicator is off-track or will require a breakthrough to be achieved.

For example, income poverty in Australia has decreased since 2000. But a person on Newstart, who would have been near the poverty line in 2000, is now 25 per cent below the poverty line due to the lower indexation rate for Newstart payments.

Life expectancy in Australia is among the highest in the world and has increased from 79.3 to 82.5 years between 2000 and 2015. Smoking rates and road traffic deaths have fallen dramatically, as well. However, Australia still has a high prevalence of lifestyle-related risks, such as obesity, and deaths due to road accidents in remote areas remain five times higher than in cities.

While Australian student performance on the Program for International Student Assessment (PISA) benchmark has been declining across science, maths and reading, Australian students perform very well as collaborative problem solvers – an increasingly important indicator for the jobs of the future. On the downside, investment in early childhood education and care remains low.

While Australia has enjoyed a record period of economic growth and disposable incomes per capita grew strongly from 2000-2012, wage growth has stalled since then and cost of living pressures are now putting a strain on families.

Two persistent challenges identified in the report are continuing inequality and Australia’s poor performance on climate action and the environment.

Despite strong economic growth since 2000, Australia’s income inequality did not improve and wealth inequality got worse.

The glass ceiling remains firmly in place and structural inequalities continue to prevent women from reaching their potential. In 2017, just 11 women led ASX200 companies, while only 30 per cent of Australian parliamentarians are female .

Meanwhile, the gender pay gap has barely narrowed in 20 years and women’s superannuation balances at retirement remain 42 per cent below those of men. And the Closing the Gap report illustrates the vast inequality gulf between Indigenous and non-Indigenous Australians.

Of all the UN Sustainable Development Goals goals, taking urgent action to combat climate change is the area where Australia is most off track.

Greenhouse gas emissions, the highest per capita in the OECD, are roughly the same now as in 2000 and are projected to be even higher in 2030. We are nowhere near meeting even Australia’s modest Paris target of a 26% emissions reduction by 2030.

Are we ready for the future?

It is clear that Australia has a considerable way to go to achieve most of the UN Sustainable Development Goals and it will require a major change from business as usual.

Despite our history of strong economic growth, our children and grandchildren face the prospect of being worse off than we are unless we address inequality, climate change and cost of living pressures.

In an increasingly polarised political and media landscape, we should be looking to strengthen collaboration between government, business, social enterprise and society. To achieve the 2030 Sustainable Development Goals, we need to overcome the short-term focus that currently dominates our political landscape and work collectively if we are to achieve a “fair go” for the next generation.

About the author: John Thwaites is a professorial fellow, Monash University, and chair of ClimateWorks Australia and the Monash Sustainable Development Institute. He is a consultant at Maddocks Solicitors providing advice to the firm and its clients on climate change, water, sustainability and corporate social responsibility. 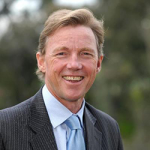 John Thwaites is a professorial fellow, Monash University, and chair of ClimateWorks Australia and the Monash Sustainable Development Institute.