Millennials Will Save The World

12 February 2019 at 8:10 am
Tina Kuek
Tina Kuek, a senior policy officer at the state government of Victoria, shares her proof that millennials are taking charge and addressing the critical global issues of today.

Tina Kuek, a senior policy officer at the state government of Victoria, shares her proof that millennials are taking charge and addressing the critical global issues of today.

For decades, young people have been told they should be the leaders of tomorrow. But what I’ve learned from my experience at the United Nations is that youth will be the heroes of today.

Last October I attended the World Investment Forum hosted by the United Nations in Geneva. I was part of a youth forum of 150 delegates – aged 18 to 30 – from over 80 counties.

It was a humbling experience to engage with so many accomplished young people, from Norway to Trinidad and Tobago, to Nigeria and the United Arab Emirates.

I met social entrepreneurs who are advocating for gender equality in Afghanistan, fighting climate change in Brazil through agroforestry, or launching one of the fastest growing FinTech’s in the Philippines to provide accessible financing for small- to medium-sized enterprises.

Among the high calibre of speakers was Botswana’s minister for investment, trade and industry – she is 30 years old and the youngest person appointed as a minister in her country.

In the era where young people are constantly labelled as lazy and entitled, here was proof that millennials are taking charge and addressing the critical global issues of today.

These are a set of goals agreed by all countries in 2015 as a universal call to action to end poverty, protect the planet and ensure a prosperous life for humanity. Young Australians and young people around the world are already championing social enterprises to achieve these goals.

In Geneva, I met a 21-year-old who manufactures high-quality undergarments in Australia. With each sale, his company gives a free pair to a homeless person in Melbourne. I also met an incredible young man fighting for the rights of transgender people in Pakistan. He became an activist after an interaction with a transgender woman on a bus, who said nobody else wanted to sit next to her because of her gender.

I quickly realised that when confronted with an injustice, millennials are not afraid to stand up and fight for what they believe in. And that’s the major takeaway for me.

My experiences in Geneva showed me that young people will be the catalyst for much-needed change in society.

Deloitte conducted a survey of over 10,000 young people across 36 countries. The top concerns for Australian millennials were climate change, unemployment and income inequality.

When choosing an employer, young Australians would rather work for a meaningful organisation that positively contributes to society – and they will take a pay cut to do so!

This generation is progressive, they demand equality, they protest human rights, they expect justice, and they are forcing organisations to become purpose driven and push for sustainable practices.

At the forum I spoke on a panel about how youth can influence the sustainable development goals.

At a first glance the goals are quite overwhelming. For instance, Goal 1 is to eradicate poverty in all its forms by 2030. It seems almost impossible to do this in 15 years. But the good news is we have already started.

Between 1990 and 2015 the number of people living in extreme poverty has dropped from 1.9 billion to 836 million. This is remarkable progress, and we need to encourage more people to act like millennials if we want to see that number down to zero.

The United Nations measures Australia’s progress against employment, domestic violence, homelessness, health, recycling and many others. There are 169 targets and 232 indicators used by the United Nations to determine if we are on track. These goals are critical for humanity and the planet, and as millennials continue to push the trend towards sustainability and social responsibility, they will ultimately save the world.

About the author: Tina Kuek is a senior policy officer at the state government of Victoria. She is also a freelance writer and social entrepreneur. Prior to her role in government, Tina worked for the United Nations and the Department of Defence. She has also worked as a Humanitarian Case Worker assisting newly arrived refugees with their settlement in Australia.

Tina’s personal interests include Instagram, fashion and travel. She has been on all continents except Antarctica and her prized possession is Barack Obama’s business card. Tina speaks three languages, is on the executive board of Girl Guides Victoria, and she is a volunteer with HerSpace. 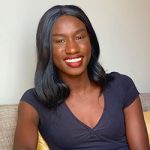 Tina Kuek is a senior policy officer at the state government of Victoria.