26 March 2019 at 8:54 am
Caitriona Fay
LGBTIQ+ projects and organisations are woefully under supported, not only by philanthropy but by funders in general, writes Caitriona Fay, general manager, community and social investments at Perpetual Limited.

LGBTIQ+ projects and organisations are woefully under supported, not only by philanthropy but by funders in general, writes Caitriona Fay, general manager, community and social investments at Perpetual Limited.

It’s fair to say over the length of my career in the philanthropic sector that I’ve seen an increasing sophistication from funders around how they think about their giving.

There’s an ever-increasing number of families and individuals looking to fund in ways that build “the fence at the top of the cliff instead of the ambulance at the bottom”. Donors want more data to understand where the “cold spots” of funding are so that they are directing their dollars to places and communities with real need.

With data sets such as those available via the ACNC and Foundation Maps Australia, we’re better placed to understand the role philanthropy is playing and to debate the role it could and should be.

It’s with that data mindset that Our Community’s Innovation Lab with support from The Channel, examined the levels of giving to LGBTIQ+ communities by philanthropy in Australia. What the data is telling us is that LGBTIQ+ projects and organisations are woefully under supported and not only by philanthropy but by funders in general. You can review the data as a visual scroller via this link.

In the last five years only 0.22 per cent of all philanthropic applications approved by philanthropists using the SmartyGrants system were to LGBTIQ+ causes and the figures are worse at state and federal government levels.

When we look at Philanthropy Australia’s Foundation Maps data from the past year we find that only $1.5 million of funding went to LGBTIQ+ specific causes and of that $1.4 million was dedicated to the marriage equality campaign.

So why is this an issue?

LGBTIQ+ communities experience homelessness at almost double the rate of the general population, they are more likely to endure bullying and exclusion at school, where discrimination against LGBTIQ+ students and teachers on the basis of religion is still sanctioned, and harmful practices like gay conversion therapy are still occurring legally in many states. All of these things can have a significant impact on educational and ultimately life outcomes of people who are LGBTIQ+.

With the LGBTIQ+ communities making up an estimated 11 per cent of our population, our failure to support better outcomes for them means we miss an opportunity to have real impact in fighting homelessness, improving education outcomes, supporting human rights and building healthy and thriving communities.

One of things data can help to do is raise awareness and that in turn needs to lead to action.

This year, for the first time ever, LGBTIQ+ organisations and those delivering services to rainbow communities are launching a giving day to highlight the great work they are doing and the fact that so much of that work is needed and underfunded.

#giveOUTday will be held in Australia on 18 April and aims to profile the many different ways the community can create impact by supporting projects focused on LGBTIQ+ communities.

Consider either matching funds via giveoutday.org.au or donating to a specific LGBTIQ+ issue or organisation you care about. Alternatively, giveOutday is a great opportunity to simply learn more about giving to LGBTIQ+ causes, or making grants directly to the huge number of great projects and causes profiled on the day.

If you are a funder operating in a space where bullying, mental health, youth suicide, education, homelessness, the arts or almost any other issue is a focus, consider where the rainbow lens might be needed or look at your own data to see whether LGBTIQ+ programs are coming across your desk.

Are you involved in an LGBTIQ+ community project?

If you’re a community group focused on or running programs for the LGBTIQ+ communities you can register your project at giveoutday.org.au to access matched funding on the day.

Alternatively, just use the day to promote giving to your organisation, and the giveOUTday team will provide you with lots of tools and messaging to help you raise much needed funds!

Make sure to use the #giveOUTday hashtag on the 18 April to profile the need for greater giving to LGBTIQ+ causes and encourage your networks to do the same!

Not sure what you can do?

Share the hashtag #giveOUTday on the 18 April. Give whatever you can, small or large, to a cause you care about. Raise the profile of an LGBTIQ+ organisation you’re passionate about.

Let’s get people talking about the need to fund more rainbow projects. Every tweet, every conversation, every post and every dollar counts to this cause.

Caitriona Fay is on the board of The Channel. 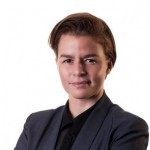 Caitriona Fay is general manager of community and social investments at Perpetual Limited.