Changing the political narrative this election

Julie Collins MP signing on to The #StigmaPledge

Print
Changing the political narrative this election
16 April 2019 at 8:24 am

In 2017, comments made by former White House communications director, Anthony Scarramucci, via phone to a reporter at the New Yorker were widely criticised around the world.

Many commentators were outraged by Scarramucci’s comments – a vile tirade containing highly sexualised and emotive language. He also levelled criticism at a political opponent by using language to describe mental illness as an insult.

These comments elicited outrage from those living with mental illness, their loved ones and mental health professionals who pointed out that we would never use other illnesses to insult someone whose opinions we did not agree with.

However, Scarramucci’s comments are representative of a broader problem in political debate in Australia and overseas. Derogatory terms to describe mental illness have now become commonplace as political insults.

In Australia, you only have to watch an episode of Insiders or Q&A to see the pervasive way in which language that can be perceived as stigmatising or discriminatory towards people with mental illness, has made its way into our political discourse.

And it’s time we did something about it.

Across mediums, whether it’s a television panel discussion, or an article in the press: Kim Jong Un is described as a “maniac”, Trump is “crazy” and the whole world has gone “mad”.

While significant advances have been made in Australia over the past two decades to address the stigma associated with high prevalence mental disorders such as depression and anxiety, people living with complex mental illness such as schizophrenia and bipolar disorder still report experiencing high levels of stigma and discrimination.

SANE Australia peer ambassador, Hannah, shared with us: “I remember the day when they told me I had schizophrenia. I didn’t know much about it at the time. I just knew all the stereotypes surrounding it. I was thinking, ‘Does that mean I’m dangerous? Does it mean that they’re going to lock me away?’ They just said it like it was nothing. But for me it was this huge, life altering thing.”

When we use terms to describe mental illness to criticise people or ideas with which we disagree, we are sending the message to young people, like Hannah, that they are to be feared. It’s this language that discourages help-seeking and makes it more difficult for people to engage in meaningful work and study. The fear of negative attitudes and community misunderstanding can lead people to withdraw.

“There’s just not enough understanding, and so much stigmatisation surrounding this illness,” Hannah explains.

“People get all their ideas from horror movies. They can be really flippant, calling people ‘psycho’ or ‘schizo’. It’s a pretty scary illness, but it doesn’t make the people who have it scary people. We’re human, just like everyone else. We all want the same things.”

There are 690,000 Australians just like Hannah, living with conditions such as schizophrenia, personality disorders, bipolar disorder and eating disorders. They come from all walks of life. They are our family members, our friends, our colleagues and yes, our leaders. But they are not to be feared or avoided or mistrusted.

It’s time we said what we meant.

If we are fearful that a policy will impact those most vulnerable, we should say that.

If we are concerned that expenditure is wasteful, we should say that.

If we believe a military action is pre-emptive or reckless, we should say that.

But it’s time we stopped using mental illness as a political insult.

This election campaign, we have teamed up with Everymind and Mindframe to ask all members of Parliament, candidates, political journalists and commentators to commit to not using stigmatising or discriminatory language by signing The #StigmaPledge.

The #StigmaPledge is an agreement to use, reflect, and display a standard of speech that adheres to Everymind’s Mindframe guidelines, which include avoiding the use of stereotypes, myths and stigmatising language associated with mental ill-health and suicide.

To date, 10 members of Parliament and candidates in the upcoming election have made this commitment.

Of course, reducing stigma and discrimination is only one step towards ensuring that all Australians experiencing mental health issues have the opportunity for a long and fulfilling life. Simply changing our language does not negate the need for real investment and reform to ensure that all Australians experiencing mental ill-health receive the care and support they need and deserve. However, it is a vital step as the use of terms and language like this can ultimately prevent people from reaching out for help and support, as well as foster negative attitudes and stigma associated with mental health conditions and suicide.

About the author: Dr Michelle Blanchard is the acting CEO at SANE Australia. Michelle is also the founding director of SANE’s Anne Deveson Research Centre which partners with people with mental illness and their family, friends and colleagues to drive policy and social change. Prior to joining SANE, Michelle held senior roles at the Butterfly Foundation for Eating Disorders and the Young and Well Cooperative Research Centre. 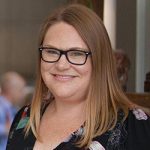 Dr Michelle Blanchard is the acting CEO at SANE Australia.