14 January 2021 at 8:23 am
Audette Exel
As the COVID-19 pandemic continues there is a lot of focus on when Australians will get the vaccine – but almost no discussion of the global situation and the impact of vaccine nationalism, writes Audette Exel AO.

As the COVID-19 pandemic continues there is a lot of focus on when Australians will get the vaccine – but almost no discussion of the global situation and the impact of vaccine nationalism, writes Audette Exel AO.

His LinkedIn post hit me like a punch in the gut. “So saddened – Africa and vaccines. The depth of poverty – others are having vaccines as we, a whole continent, await charity. So unequal! So humiliating!” The pain of Dr Peter Waiswa – one of the leaders in newborn health in Uganda, a professor at Makerere University School of Public Health – was piercing.

Here in Australia, it’s hard to fathom this pain. For us, it’s not a question of if we will receive the vaccine but which one and when. Meanwhile, African countries and many others struggling in the Global South, battle COVID-19 without access to enough oxygen, equipment, or PPE. They watch the roll out of the vaccine begin in the UK, Europe and the USA, and some of their health leaders feel humiliation. As if the global failure to live up to the simple concept of health equity and of equal access to vaccines is somehow a situation born of their failure alone, of their creation.

As if they – rather than all of us – are the villains of this story.

I scroll my Twitter feed. Many are proclaiming victory. There’s the Italian virus czar Domenico Arcuri proclaiming, “Today is a beautiful, symbolic day. All the citizens of Europe are starting to get their vaccinations, the first ray of light after a long night”. Followed by Ursula von der Leyen, head of the European Union’s executive commission, telling us that with the extra vaccines in development, the EU will have more shots than necessary and “could share its surplus with the Western Balkans and Africa.”  I grimace. It sounds like such an afterthought. In the UK, the health secretary apparently likened the day of the first UK vaccine shots to V Day – liberation and a victory – but for whom?

It’s hard to miss the glaring omissions in this “victory” – refugees and asylum seekers, marginalised and vulnerable populations, people of colour, citizens of low- and middle-income countries. The list of those who will come last – even in the wealthiest countries – and for whom a vaccine may be too late, is long. Very long.

The constitution of the World Health Organisation tells us, “The enjoyment of the highest attainable standard of health is one of the fundamental rights of every human being without distinction of race, religion, political belief, economic or social condition.”  Yet more than 50 per cent of the world’s rural population and 20 per cent of the urban population lack access to institutionalised health care. As the pandemic engulfs us, they are left to wait for “charity” at the back of the queue, no matter the lofty principles that we have agreed on as a world.

So who are the villains in this story? COVID-19, the invisible hitchhiker which has turned our world on its head, has no malice – just an amazing ability to replicate and to harm human bodies, no matter who we are, or where we contract it. Its ability to spread has been much aided by wealth and income inequality in our communities, our countries and in our world. We have, if you like, a mega systemic villain – our dreadfully unequal planet. Our neighbours in the developing world often take enormous personal risks as they focus on their local villains and press their leaders to end cronyism and corruption, to embed the rule of law, and to allocate their limited resources to public health, rather than to other less productive uses. And what of our role? We need to consider our own actions, including our drive to compete for, and stockpile, vaccines for us alone.

The bare facts of vaccine nationalism are hard to fathom. Wealthy countries like the USA, Canada and the UK, along with the EU, have purchased enough vaccines to vaccinate their populations several times over. Their actions strip the global supply and delay equitable distribution for perhaps years to come. Many poor countries could be waiting until 2024 to fully vaccinate their populations. Add that to the massive difficulty that poorer nations will have paying for vaccines, which will likely cost between $5 to $50 a dose. This is an impossible sum in countries where vast numbers of citizens live in extreme poverty, where a tax base is almost non-existent, and where these mostly failed states have no real functioning economies. Top it all off with the complexity of delivering a cold chain infrastructure for remote communities and you hit the Torment Trifecta. The Pfizer vaccine needs to be kept at impossibly cold temperatures – lower than Antarctica in winter. Not likely to be useful in Africa, just yet.

And this is where each of us steps in – with a focus on victory, not villainy. Our tax dollars have allowed our countries to stockpile vaccines in development, elbowing our way to the front of the global queue. We have watched governments reduce overseas development assistance throughout the crisis, often without substantive debate. We seem at times almost oblivious to what is happening to our neighbours around the world, as we worry about the home front.

COVID-19 connects us all, while at the very same time creates a distance between us that seems almost impossible to bridge.

We can change this awful trajectory.

There is a path to victory within sight that will allow us to right the balance together. Whether we do that by lobbying our politicians for fairer outcomes, by donating to great international aid organisations as well as our local not for profits, by building businesses where a social purpose is embedded and effective, or by participating in the global discussion on how to meet this pandemic head on.

This is also where COVAX comes in – a hugely important global alliance – focused entirely on the rapid, fair and equitable distribution of vaccines. In COVAX we see the combined effort of philanthropists, governments, drug companies, the WHO and other international organisations working together to meet this overwhelming imbalance, coordinated by Gavi, the Vaccine Alliance. The Australian government has joined the COVAX Facility – along with more than 180 other countries. Our participation allows us to purchase vaccines as they become available, as well as to support lower income countries.

COVAX has secured their target of 2 billion doses, enough to vaccinate approximately 20 per cent of people in low- and middle-income countries. A start only – short of a total victory for sure – but a significant step in the right direction.

Without doubt, the extraordinary achievement of scientists, researchers, governments and pharmaceutical companies in creating vaccines within the last 12 months is cause for huge celebration. Now it is our turn – to ensure that their gift to us is a gift to every global citizen, no matter where they live. To Peter. To the people of Uganda. To the people of the world. No more humiliation – just a collective responsibility for one of the truly wicked problems of our lifetime.

Now that truly will be a victory that we can all be proud of. 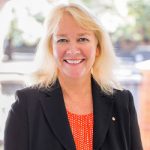 Elected a Global Leader of Tomorrow by the World Economic Forum, Audette Exel AO is the founder of the Adara Group and CEO of its Australian financial services businesses, Adara Advisors and Adara Partners.