Bitcoin will neither destroy, nor save the environment.

26 February 2021 at 5:48 pm
Will Dayble
There is a huge debate about the environmental impact of Bitcoin, but everyone is debating the wrong things, writes Will Dayble.

Print
Bitcoin will neither destroy, nor save the environment.
26 February 2021 at 5:48 pm

There is a huge debate about the environmental impact of Bitcoin, but everyone is debating the wrong things, writes Will Dayble.

Some are bullish on Bitcoin, and sincerely worried about its energy use.

The issue with these views is that they debate effects, not causes. It’s like debating band-aid production efficiencies when a child falls off their bike, without worrying about why the child fell off their bike.

Bitcoin is mined where power is cheap, the same way corporations move factories to wherever labour is cheapest. Energy in, profit out.

If power is cheap via coal in China, mining moves there. Ditto solar farms in outback Australia. The profit system follows the path of least resistance.

Fossil fuels are underpriced by ~$5 trillion. Changing the energy efficiency of crypto won’t change the pricing of fossil fuels, and therefore any effect of crypto on climate is second order.

We can look to Preventative Medicine for an example: Obesity.

15 per cent of the world is obese. Efforts that target this specific population reduce obesity within the obese population, but do nothing to affect obesity overall, because nearly obese people (a majority) continually “fill up” the obese population. To actually fix obesity, measures need to be taken to stop the majority of people from the likelihood becoming obese: Walkable cities, fewer cars, removing sugar subsidies.

Same deal with crypto. Even if crypto is calculated to be more energy efficient overall than legacy financial systems, it will not change energy policy, any more than efficient anti-obesity measures don’t change the fundamental weight problems of the majority population.

If this sounds absurdly simple, it’s because in principle, it is. In practice, it’s hard. The necessarily messy democratic process of building political will for regulatory change is a different process to that of technical innovation.

I personally think this is where many crypto fans get tripped up. Regulatory change and crypto are different processes. If you want to get good at tennis, you don’t learn to crochet, you play more tennis. The connection is that time spent on one isn’t spent on the other.

In fact, efficient downstream technology can tacitly protect bad policy. Jevon’s paradox means that good tech increases use of cheap commodities. Bigger roads are filled with more cars. Highly efficient ambulances reduce deaths from crashes, but ambulances don’t reduce the length and number of roads. Total driving distance is the key to road deaths, not ambulance efficiency. Cars are unsafe at any speed.

Public budgets are constrained. Spending on one thing precludes spending on another, unlike my seemingly infinite $THETA gains.

The mayor can invest in ambulances or ads to seem like something is being done about road death, which masks the core driver (hah) of the problem.

As the GameStop debacle has highlighted, US financial regulation serves the needs of the financial elite, it’s corporate capture of a regulatory structure. The same is true for the dark money in energy policy. While GME has highlighted the problems with regulation of financial markets, it will not change those regulations.

The state makes and enforces laws, and absence of regulation is regulation: Not having laws around cutting down trees incentivises logging.

Tech does influence policy, but a few steps removed. Tech innovation creates wealth, and that wealth defends itself via policy intervention. We rotate who sits on the throne, but it doesn’t change the structure of the throne room.

There’s a big gap in the discourse. We don’t need “more” or “less” regulation. We need regulation that incentivises what most people want, and disincentives the opposite.

This may be American hyper-individualisation at play: Both sides of the debate frame in terms of individual action. Environmental activists condemn other individuals for flying, using plastic, and eating meat. Wokesters demand self-regulation for the global good.

Another side decries downward pressure on individual freedoms by powerful elites, and claims this can only be solved through individual action. Protect your crypto keys with a gun on your homestead. Self-regulate your behaviour, clean your room.

(Apologies for offence to anyone who feels personally targeted here.)

What I find fascinating about this is that the subconscious desire for individual action, no matter the political backing, is a deeply embedded social construct that often goes unquestioned:

“When incentives or other influences lead people to behave in ways that conflict with their existing mindsets – when they are induced to do things they don’t agree with or that run counter to their current understandings – it can lead to changes in their thinking. In this kind of situation, the experience of dissonance between thinking and behaviour creates pressure that is often resolved by changes in thinking that bring mindsets in line with behaviour. These changes in thinking, which typically happen unconsciously, relieve the discomfort of dissonance.”

It’s the evil twin of the “breathe deep until your mind calms down” trick. My wealth was earned, and his poverty was a choice.

Crypto fans are excited about the possibilities of crypto to transform finance, and they’re right. It’s a carrier-pigeon-to-smartphone step change, and it’s amazing. Citizens globally are being involved in rebuilding 1000-plus years of financial instrumentation in a decade or two.

Environmental activists on the other hand are excited to halt environmental degradation, and that’s desperately important. Pointing the finger at downstream technology or individual users however, distracts from the important work of political will for upstream regulatory change. The term “carbon footprint” is a great way to make individuals feel guilty for something that can’t change as an individual.

There doesn’t need to be a middle ground, because they’re separable, linked problems.

Okay maybe finance. But not the other stuff.

Political will for regulatory change, however, does.

H/T to Nic Carter for support, both the title of this article and his erudite explanations of the complexity of energy and crypto. 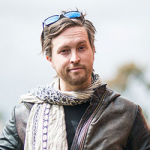 Rebuilding our society: What should a reimagined Australia look like?

Unleashing your inner radical: lessons learned from a time of upheaval