10 November 2015 at 9:35 am
David Gonski AC
Having an education can be the difference between a life full of productivity and satisfaction and a life of some sadness at being unfulfilled, writes business leader and philanthropist, David Gonski.

Having an education can be the difference between a life full of productivity and satisfaction and a life of some sadness at being unfulfilled, writes business leader and philanthropist, David Gonski.

I was very young when I first noted the difference between the lives of my grandfather and my father. It is the contrast between the paths of these two men, who loomed large in my life, that has pushed me to know and champion the value of education.

My paternal grandfather to me was a highly intelligent person, but he seemed unfulfilled. He had grown up in Eastern Europe and subsequently made a modest living by selling and distributing cloth in his adopted home of South Africa. He seemed to long for a deep involvement in and valuable contribution to his new country.

My father, who I also felt was very intelligent, was a very busy, totally fulfilled man. As a brain surgeon overseas and in Australia, he battled to save lives – and often did.

I was much older when I realised the reasons behind the difference between these two influential men in my life.

My grandfather didn’t have a proper education. He didn’t attend school for long, leaving school in his early teens. He wasn’t offered the opportunity of tertiary education or formal training of any significant sort.

Having an education, and ultimately a skill, can be the difference between a life full of productivity and satisfaction and a life of some sadness at being unfulfilled.

By contrast, my father, despite moving at the age of 10 from Eastern Europe to South Africa, did well at school even though English was not his first language. Dad went on to a university education. Interestingly, his tertiary education had to be tailored to his financial position: he had to delay starting medicine until he already had a degree in science and was able to finance further studies.

Being educationally disadvantaged for whatever reason – including lack of funds – doesn’t mean that one isn’t clever and able to do well at school and beyond.

This concept was the essential thrust of what our review of school funding – which has become known as the Gonski Review – recommended should be the basis of funding of schools throughout Australia. We advocated strongly for a “needs-based funding model”, which put simply is a model that recognises that those facing educational disadvantage may require additional assistance.

This idea has not fallen on deaf ears and is now the basis of most school funding systems within Australia. The problem, of course, is that to fully implement our recommendations and not take away money from other priorities, more money is needed. Each time I hear that point being made, however, I think: what if someone had used money to address the educational disadvantage of my grandfather? The result undoubtedly would have been an improvement in his life and, given his capabilities, an increase in his productivity, with benefits to his society generally.

If my comments seem to suggest that only those who have aspired to the highest of educational standards can be happy and productive, I have been misunderstood.

I do believe that all should be given the basic opportunity of full school education. I don’t believe that university education is the right thing for everyone, nor do I believe that those who don’t have university degrees are in some way inferior.

After a well-tailored and complete school education, all young people should be encouraged to learn a skill, whether it be at university, at a technical college or under an apprenticeship. To be very good at something that is needed in a community – whether it’s as a carer in an aged care home, an electrical lines worker or equally a nurse or brain surgeon – is a wonderful achievement and should be valued and savoured.

This year marks the 40th anniversary of my grandfather’s death and the eighth of my father’s death. Their memory stays clear and vivid in my mind, as does the difference between their enjoyment of life and their achievements.

My hope is that every young person in Australia should be given every chance to contribute, with all of us supporting and applauding their achievements in whatever field and at whatever level they aspire to.

About the author: David Gonski is one of Australia’s most respected businessmen and philanthropists. He is Chairman of ANZ and Coca-Cola Amatil, and Chancellor of the University of New South Wales.

This article was originally published by national welfare agency, the Brotherhood of St Laurence. 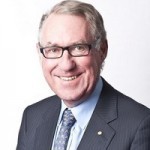 David Gonski AC is one of Australia's leading businessmen and philanthropists.

Ask Izzy campaign rolls out across Melbourne, showcasing the power of tech for NFPs