Where is The Sustainable Consumer Heading in 2018?

15 March 2018 at 8:30 am
Georgia Gibson
How do we capture the sustainable market, questions Georgia Gibson, from Ellis Jones.

How do we capture the sustainable market, questions Georgia Gibson, from Ellis Jones.

As we continue to venture into the danger zone with our environment, sustainable consumers have been steadily on the rise, and before we know it, they’ll be dictating how we do business.

So how do we prepare, and not get left behind in a cloud of reusable plastics? Where is the sustainable consumer heading, and can we give them what they’re looking for?

Here are five moves the sustainable consumer is making:

They’re checking who they do business with

In the midst of the funding backlash that surrounds the Adani Carmichael coal mine, the sustainable consumer is beginning to do their business elsewhere, with many actively divesting from the sponsorship of ventures that damage the environment.

Investment in fossil fuels by major corporations is no longer par for the course, with nation-wide campaigns from environmental lobbyists driving consumers to divest in companies that support dirty energy.

Mahatma Ghandi called this “passive resistance”, and it opens up the path for new investment in clean energy and environmental initiatives. One destination for the sustainable consumer is community banks (otherwise known as credit unions), which invest in community initiatives and green projects. Institutions like Bendigo Bank, that reported 98 per cent customer satisfaction in 2017 — so they must be doing something right.

When money is power, voting with dollars holds just as much oomph as picketing a fracking site. Two thirds of consumers are now actively avoiding purchasing products or services that they deem to be environmentally unfriendly. Deloitte and Chartered Accountants Australia found last year that 64 per cent of consumers in the Asia-Pacific region were willing to spend more on socially conscious brands.

Brands like LUSH, who have been taking a stance on disposable packaging and animal testing for decades, and Who Gives A Crap, who use entirely recycled paper to make their toilet paper and donate to development projects, are revolutionising their respective industries, and luring customers away from their less sustainable competitors.

Renewable energy is on an unstoppable rise in Australia, with January 2018 seeing a 69 per cent rise in installations of solar panels compared to the previous year. 2017 was also the biggest year on record for solar installations in Australia. The sustainable consumer is more attuned than ever to their dependence on energy in their home, and as prices and emissions rise, they’re being vigilant.

For those that can’t make their own energy from their rooftop, they are switching where they buy it from. Customers choosing to purchase accredited GreenPower last year resulted in an extra $80 million being invested in new renewable energy generation across the country (in addition to investment stimulated by state and national renewable energy targets).

In Victoria, of the large and medium energy retailers, the biggest percentage growth in customer-base was achieved by the energy company with the strongest renewable energy proposition. It was the second largest in real terms (actual number of people) – out-competing the big three in customer acquisition, with presumably a far lower marketing spend.

They’re thinking about where their waste goes

2017 changed the game for the sustainable consumer and their approach to waste. Just when we all thought our recycling was enough, we saw the true damage that our waste has. The War on Waste showed us the magnitude of Australian refuse, a scathing ABC report revealed that Australian e-waste is ending up in West African toxic dumps, and our recycling industry has been thrown into disarray following China’s ban on contaminated recyclable goods. Now, the sustainable consumer is really standing to attention. KeepCup saw a 400 per cent rise in sales after the War on Waste aired, Darebin council is banning the sale and use of disposable plastic on their land, and even the Queen is on board! But areas such as e-waste are lacking, and the sustainable consumer is looking for an easy way to curb the predicted 90 per cent of e-waste that is illegally dumped globally. Now industry and government are responding; innovators are getting on board, with companies such as Substation33 and TechCollect taking e-waste and giving it a new life, and the Victorian government set to introduce a ban on e-waste going into landfill mid-2018.

Technology is bringing new horizons to the sustainable traveller, who wants to tread lightly on the earth as they traverse it; and they’re not short on options in 2018. The Victorian government announced that Melbourne’s trams will be 100 per cent solar powered by the end of 2018, thanks to the construction of a new solar plant. The South Australian government is gearing up to offer thousands of dollars of incentives to sustainable consumers who buy electric vehicles, aiming to make the state’s transport system carbon-free. And while air travel is undoubtedly the mode of transport with the highest carbon emissions, the number of sustainable consumers offsetting their travel has increased by 10 per cent in a year, with a third of airlines globally now offering offset programs, and growing.

So, now that the sustainable consumer has had their basic skills of saving water, switching off appliances and recycling down-pat, they’re diving deeper into their actions, and the effects they have on the environment. They’re checking their supply chains, seeking transparency, and favouring the changemakers. We’ve seen brands with environmental purpose embedded into their practices soar, as they continue to capture the ever growing market of sustainable consumers. So, as the consumer makes the shift from the traditional to the environmentally innovative, it’s up to us to keep up.

About the author: Georgia Gibson works as an account executive as part of communications, design and social impact agency Ellis Jones. At the agency, she is contributing to the agency’s work in environment, energy, government and education; she is deeply passionate about working with sustainable and purposeful businesses. LinkedIn. 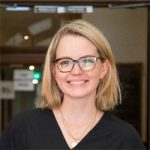 Seniors conquer the digital divide with a little help from friends