1 November 2018 at 8:37 am
Naomi Steer
After recently returning from refugee settlements in Lesbos, Australia for UNHCR national director Naomi Steer explains why direct cash assistance is actually one of the most efficient and effective forms of humanitarian aid delivery.

After recently returning from refugee settlements in Lesbos, Australia for UNHCR national director Naomi Steer explains why direct cash assistance is actually one of the most efficient and effective forms of humanitarian aid delivery.

It had been raining for two days at the Moira Reception Centre on Lesbos when I visited a few weeks ago. Asylum seekers and refugees, mostly from Syria, Iraq and Afghanistan, were struggling in the crowded conditions and flimsy dwellings, and were desperately asking to be moved to the mainland with better, more secure shelters.

It’s a tough place to live, and the influx of refugees has been a huge adjustment for locals on Lesbos, a Greek island that until recently was famous simply for its idyllic beaches and laid back lifestyle.

One of the few clear success stories for refugees and locals alike that I heard about on Lesbos is the cash assistance program. Administered by the UN Refugee Agency (UNHCR), it’s a monthly cash payment, loaded onto a card, for refugees and asylum seekers, who would struggle to survive without assistance.

The amount is only a few hundred euros per month per family, and the exact amount depends on the size of the family. But it is enough to help people with the absolute basics.

The concept of cash handouts can be highly politicised in our own country, but it is actually one of the most efficient and effective forms of humanitarian aid delivery.

Asylum seekers and refugees can decide how to spend the cash, depending on the specific needs of their family. Aid agencies are saved the – often significant – expense of procurement, storage and distribution of essential supplies. And host communities benefit when the money is spent in their businesses.

Colleagues on Lesbos told me that the decision to deliver aid via direct cash assistance has helped smooth relationships with the locals as it brings money into the economy. Even several years since refugees began arriving in Lesbos, the local community remains generally supportive and sympathetic.

On a larger scale, direct cash assistance is becoming increasingly popular, and its use has grown dramatically in recent years. In 2016-2017, UNHCR reached 10.5 million vulnerable people across 94 countries with cash assistance. Targeted programs also employ cash assistance as a protection measure – along with other services – to prevent families being forced to resort to negative survival strategies such as child labour or early marriage.

In Jordan, increasingly sophisticated technology is being utilised and iris scans are now used at ATMs for Syrian refugees receiving cash assistance to ensure only the designated recipient can make a withdrawal. Not all refugees are eligible, just to most vulnerable, such as female-headed households, the elderly or people living with chronic illness or disabilities.

I’ve heard from mothers in the Middle East that the small amount of cash assistance they receive is what stands between them and becoming homeless or being forced to return to the warzone in Syria. They have told us how important it is for them to have the dignity of choosing how to spend the aid they receive – as mothers they know best what their children and the family needs most each month, whether it’s food, warm clothes, or medicine.

As the national director of a humanitarian aid charity, reliant on private sector donations, it’s also increasingly apparent to me that this is a system that delivers value for money to donors. On average, using direct cash assistance, 93 per cent of each dollar goes right to the families who need it most.

The reasons for using cash assistance can be more complex than other forms of aid – and it certainly doesn’t lend itself to dramatic PR photographs – but the benefits are immense, especially as technology develops, making it even simpler to distribute and monitor.

About the author: Naomi Steer is the founding national director of Australia for UNHCR, which raises funds for the international humanitarian program of the United Nations Refugee Agency. 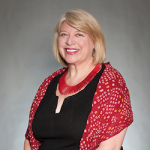 Naomi Steer is the founding national director of Australia for UNHCR.