2 June 2021 at 3:39 pm
Garth Stirling
Garth Stirling, ntegrity’s head of services, explains why tax time donors are different and how NFPs can make their tax appeal work harder for them on digital.

Garth Stirling, ntegrity’s head of services, explains why tax time donors are different and how NFPs can make their tax appeal work harder for them on digital.

You know it’s the end of the financial year (EOFY) when you’re suddenly bombarded with advertising shouting: Huge EOFY sale! EOFY-THING could be tax deductible.

In charity land, EOFY is also a critical time. In Australia, June is a time when we see more donation revenue come through than any other month.

However, unlike giving at other times, EOFY donors are different. Here are four reasons why:

1. They usually fit the profile of a middle or major donor

Instead of individual donors who give between $50 to $200 in an appeal, the key EOFY donor segment fits the profile of a middle or major donor. They are likely to give a high value donation, and it is likely to be a once-off gift.

While these donors act more like middle or major donors they may not be identified with this audience yet, and could be hiding in your wider individual giving programs. They can be proactively identified through profiling by asset value or income via their postcodes.

2. They are often monogamous

Or at least, they are in terms of donations! While Australians give to multiple charities throughout the year, during EOFY most give their big donation to just one organisation – due to convenience and time pressure.

That’s why it’s critical to start stewarding these high value donors well ahead of 30 June, so that when that time rolls around, your charity is top of mind and you’re tapping into a latent demand.

Often they are donors who want to take advantage of the tax benefits of a donation, and may not know how much they need to give to stay within their tax bracket until late June. Or if they are self employed – they actually don’t  know how much they can give until their accountant tells them.

That’s why at EOFY, there is a massive jump in donations in the last few days leading up to 30 June. In fact, many organisations will see approximately 55 per cent or more of their revenue come in during the final week, and around 60 per cent of that will come in the final three days of June. Make sure you plan your media budget accordingly.

With this in mind, it’s also important to ensure the online giving process is seamless and easy for your donors. Your donors might want to give $20k, $50k, $100k and they want to get it in just before the deadline. Consider ways to make this easy for your donors: chatbots on your website, a call centre that is open on weekends during those final few days and till 11.59pm on 30 June.

Because donations are made last minute, you’re mostly talking to people who already know you i.e. those who have given in the past 12 to 24 months. Unlike other appeals, your EOFY appeal is not usually about acquiring new donors; although last year we saw many tax appeals transform into emergency appeals during COVID-19.

Your messaging should be about convincing your donors that they should give to your cause above many others clamouring for attention at this time of year.

EOFY appeals are unlike anything else you’ll do all year. Combine a competitive market, unique donors, and an urgent deadline and you get something very different from your regular run of the mill appeal. They’re one of the biggest opportunities to raise money, if you don’t put your best foot forward, you’re leaving donations on the table. Hopefully, by keeping some of these factors in mind you can create a tax appeal that works harder than an accountant in June.

About the author: Garth Stirling, is head of services at ntegrity. 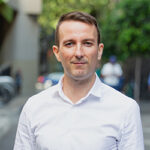 Garth Stirling, is head of services at ntegrity. He has over 15 years experience in senior marketing roles in the UK and Australia. Most recently he was head of marketing at World Vision where he oversaw the turnaround in child sponsorship acquisition, new product launches and growth in digital donation revenue.

Donor trust: Hard to get, easy to lose