15 July 2022 at 12:11 pm
Isabelle Oderberg
Aliya Ahmad is a media campaigner with a passion for elevating the voices of diverse communities, so they can participate in the mainstream media and the public discourse. She is this week’s Changemaker.

Aliya Ahmad is a media campaigner with a passion for elevating the voices of diverse communities, so they can participate in the mainstream media and the public discourse. She is this week’s Changemaker.

Aliya Ahmad’s family is originally from Pakistan (and as she says “more broadly South Asia – Bangladesh and India, because what are borders anyway”), but she was born in London. She grew up in Vietnam, Kuwait and Malaysia before moving back to Melbourne for university.

She describes herself as fortunate to have had an upbringing where she met “lots of different people with different experiences and backgrounds, and going to international schools where cultural differences were (mostly) celebrated”, never feeling out of place.

But when she moved back to Australia to attend university, she felt unprepared for the blatant racism she encountered on campus.

“Once I started to follow Australian politics and the news, it started to make sense why people held certain beliefs and attitudes about migrants and people of colour more generally; the status quo was wealthy, white, older men, and there wasn’t much space in the media for people who didn’t fit that bill,” she explains.

Ahmad went on to study history and politics – focusing on decolonisation and race relations in South East Asia – and volunteered at Democracy in Colour to support and amplify the voices of communities working towards racial justice in the media. She worked on national media campaigns at Essential Media on issues like housing affordability and public education, and then as the media adviser at the Council to Homeless Persons, the peak body for homelessness in Victoria.

She is now co-director at the Economic Media Centre, a partnership between Australian Progress and the Australian Council of Social Service (ACOSS), founded at the start of the pandemic in 2020. EMC is an advocacy organisation that connects journalists with a talent pool of economic spokespeople.

In this week’s Changemaker, Ahmad talks about her activism and the challenges of changing an entrenched status quo that doesn’t always centre the voices that need the most support.

The pandemic and the recession exacerbated economic inequality. Policies and narratives running in the media about the most affected communities weren’t actually engaging with those communities. For example, how were people without a home expected to follow lockdown orders without access to a safe, secure and affordable home? Migrant communities were being demonised in the media whenever there were new outbreaks –- even though they were the essential workers keeping us all safe, or were working multiple jobs because they didn’t have access to any income support. More people were starting to rely on the social safety net that had slowly been chipped away by successive governments, and people living below the poverty line were being talked about, rather than talked to.

The Economic Media Centre was founded in mid-2020 because many of the government’s responses to the pandemic were compounding economic inequality, and community voices were missing in the public discourse. I joined the Economic Media Centre during its pilot phase at the start of 2021 because I wanted to support diverse spokespeople to participate in the mainstream media and advocate for the policy solutions that worked for their communities.

We support community spokespeople to participate in media debates by providing pitching, strategy and messaging support, so that collectively, we can secure more inclusive policies.

Every day is different, but it always starts with an early morning scan of all the papers and outlets to get a sense of what issues are on the political news agenda for the day. Most days I’m trying to think of new media opportunities for people in the Economic Media Centre’s Spokesperson Network, or meeting with grassroots and community groups to talk about media strategy on how they can best use the media for advocacy and creating media strategies.

We also run a regular two-day media training program (via Zoom), so if it’s a training week, we’re preparing personalised interview scenarios to practise with participants. Other times, I might just be managing reactive media requests from journalists or producers asking to book someone from the Economic Media Centre’s Spokesperson Network for TV, radio or print, on issues of housing and renters rights, income support, or any other economic issue. It was super busy during the election period because the cost of living, housing stress, and gender equity were election issues and so many spokespeople and groups that we work with advocate on these issues.\

We can provide pro bono media support to community and grassroots groups and organisations because we’re fully philanthropically funded. But that means that we have to make sure that we are regularly evaluating and sharing the impact of the work that we do to our supporters and the wider community. So I also make sure to spend some time each day reviewing what media spots spokespeople have done and analysing narrative shifts on key issues over time.

What are some of the challenges working in not for profits generally?

I think there is a lot of structural inequality baked into the sector, from upholding the white saviour model in service delivery, to what organisations are seen as “legitimate”, based on their charity or legal status.

For me, I think the biggest challenge is recognising the role I play in both upholding status quo power (for example engaging with the traditional media model) but also in trying to shift that power (by diversifying who participates in media debates). It’s tensions like this that I think many of us try to make sense of. I think there is a lot of goodwill in the sector to try and understand how power operates and who holds that power, but it will always be an uncomfortable conversation to have because it sometimes means people who have traditionally held that power might need to pass the mic.

Ultimately, we can’t, nor should we, ignore that we are organising and campaigning on stolen land. The work we all do, and have a passion for, is possible because generations of First Nations communities have been doing this work on this continent, and it’s essential that their knowledge and expertise is central to all the social justice work we do.

What is your proudest achievement?

It’s hard to pick one, so I’ll narrow it down to work I’ve done with the Economic Media Centre. Last year when there was the COVID outbreak in the South Western suburbs of Sydney, the New South Wales government announced that it would send mounted police officers to enforce the lockdown.

The response was so heavy handed and reeked of racial scapegoating because those suburbs are primarily migrant and working class communities and the wealthier, whiter suburbs were never subjected to such intense policing during lockdowns.

I worked with Democracy in Colour spokespeople, and others who live in the area and regularly campaign on community issues, to get a rapid response media campaign off the ground to call for a community-based approach to managing the outbreak. The result was that there was widespread denouncing of the heavy-handed policing approach.

Had that media campaigning not happened, those communities might have had to deal with media narratives that unfairly targeted and demonised them for the lockdowns. It was really powerful to see community voices front and centre talking about what they needed (a health response that was culturally safe and community based) dominating the headlines during that time.

What do you think are some of the challenges being faced by the sector going forward?

I don’t think it’s as much of a challenge as it is an opportunity, but I think we’re at a place where we can’t be power-avoidant anymore. Community organisations and grassroots groups have the solutions, but are still often locked out of so many conversations. I think there’s been a lot of work from organisations in the sector to elevate the voices of people with lived experience of inequality or injustice, but to truly shift power, we need to start recognising these experiences as expertise, especially when advocating for different solutions.

Doing media campaigning taps into my extroverted side, which I love, but it does mean that when I’m not working, I’m really not working – I become a total homebody. I’m usually at home baking desserts or cooking huge feasts. Feeding people is my love language, big migrant Muslim energy!

What do you want to achieve by the time you retire?

This movement is so much bigger than one person and I think collectively we’re all just trying to create a more just and equitable society – especially because the pandemic has created this huge opportunity to think creatively and reimagine whole systems. It’s very cool to see communities taking up space and holding power to account, and honestly, I just want to see more of that. 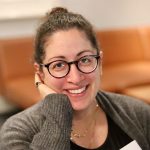