28 July 2016 at 9:57 am
Richard Trudgen
The ABC report of juvenile injustice in the Northern Territory portrayed a deep underlying culture of mistrust, but Australia needs to move beyond the “neo-cultural cringe” and be ready to truly listen to the First Nations People, writes Richard Trudgen, CEO of Why Warriors.

Opinion:The ABC report of juvenile injustice in the Northern Territory portrayed a deep underlying culture of mistrust, but Australia needs to move beyond the “neo-cultural cringe” and be ready to truly listen to the First Nations People, writes Richard Trudgen, CEO of Why Warriors.

Ask any Yolŋu person (Aboriginal person from north-east Arnhem Land) and they will tell you the deep levels of mistrust that exist just under the surface of relationships between themselves and the general mainstream Northern Territory culture. They will have hundreds of stories to tell about their experiences, from being manhandled and abused by security guards in shopping centres, seeing their relatives assaulted when police are called to control a disturbance, in colleges where they struggle to be heard, their difficulties in the hospital and medical system, where their primary languages are not used in contemporary educational institutions, and where Australian law systems (which they have not assented to) are forced on them by a dominant mono-lingual, mono-cultural society. Where, in both subtle and obvious ways, they are still labelled as primitive and backward even today in 2016.

This culture of mistrust is deep. This “neo-colonial cringe” still exists not just in the Northern Territory but across the whole of Australia. Does this mean that every Balanda (European or English first language speaking person) is racist or bad? No. But it points to a deeper condition which is hard to expose until we see it on the extreme edges of society like it was exposed on Monday night.

Working in the NT is like continuously crossing an extremely busy road. You cross from one cultural existence into another, through what we call the Grey Zone that operates between two distinct and very different cultural groups. While there are a number of good people stuck in the middle of that busy road who are trying to get better communication happening across that divide, it requires constant attention and skill and can be exhausting and dangerous.

Having been called to Don Dale Youth Detention Centre to speak to a Yolŋu youth who was locked in one of those cells I had a deep personal and gut wrenching response to what I saw. It only needed one visit to confirm the worst. I was called there to see if I could help a young Yolŋu prisoner to open up and communicate, yet he was being kept in a disgusting environment that would never facilitate communication.

None of the staff had been trained how to communicate in a cross-cultural, cross- language environment. Most staff came from a mainstream Australian European background that is mono-cultural and mono-lingual. Sadly this leaves them completely uninformed and unskilled to work with Indigenous young people many of whom come from a completely different culture and speak English as a fifth or sixth language. Putting this young person in isolation only made his trauma much worse and unwilling or even unable to communicate in a foreign language, English. For the detainee its equivalent to being in jail in a foreign country that speaks a foreign language.

Northern Territory being on the doorsteps of Asia could be the leading community in Australia to understand and participate in a true multicultural community. However this requires a culture of change. People coming from the mainstream Northern Territory community working in cross-cultural environments need training in cultural competency. They need to become mindful of the differences within different cultural groups. They need internationally proven information and knowledge as to what makes cultural groups different and how to relate in truly positive ways. And they need to be taught skills relevant to working across cultures; skills that are not learnt when you grow up in a mono-cultural and language setting.

Only then will the culture of the Northern Territory move from its aggressive neo-colonial position to an informed and inclusive stance more appropriate in a 2016 democratic society.

Some people might want to blame the government / governments for this failing. However all political parties, every government department and the general voting NT population needs to be called into question here.

What we saw on Monday night is a window into the abuse that occurs right across the spectrum, from the police department, education / colleges, health, family and children’s services and the media. People need to move beyond neo-cultural cringe and be ready to truly listen to the First Nations People of Australian and to recognise their languages, and political and government systems as uniquely Australian, and as systems that are extremely valid in a modern world.

Yolŋu also have traditional correctional services systems that when used have great outcomes. But more importantly if Yolŋu and other Aboriginal people that still have their original Australian structures were included rather than continually excluded we would not have our jails filling to overflowing as they are now.

We might even discover an Australia most of us in the mainstream never knew existed and in doing so actually Close the Gap.

About the author: Richard Trudgen is the co-founder of training company Why Warriors and is the author of Why Warriors Lie Down And Die, an analysis of the cross-cultural differences and challenges on the interface between mainstream and remote Indigenous Australia. Trudgen has been pioneering community education and development for the last 43 years, of which the last 35 have been spent working alongside the Yolngu people of North East Arnhem Land. Why Warriors has set up a Not for Profit arm called WW Org Ltd. 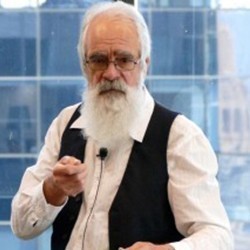 CEO of Why Warriors