It’s What We Do With #AidToo That Counts

21 June 2018 at 8:30 am
Susan Pascoe AM
We need a world where people affected by sexual misconduct are empowered to say “enough is enough”, writes Australian Council for International Development president Susan Pascoe AM.

We need a world where people affected by sexual misconduct are empowered to say “enough is enough”, writes Australian Council for International Development president Susan Pascoe AM.

#MeToo has moved from a moment to a movement. Eliminating gender inequality – the real driver of sexual harassment and abuse – is not the work of a moment. It requires even more time, pressure and grind than it has taken to sustain it. In international development and aid, #AidToo cannot pass us by. We must harness and maximise this critical juncture of change.

Following the grave reports of sexual misconduct in the aid sector from the UK, and as the new president of Australian Council for International Development (ACFID) and former commissioner of the Australia’s charities regulator (the Australian Charities and Not-for-Profits Commission), I feel an acute responsibility to turn #AidToo into real and substantive change.

As organisations who exist to protect and work with vulnerable people, international development charities have a great responsibility. Because of the work they do – in some of the most challenging humanitarian and conflict-ridden contexts – they have some of the greatest challenges.

In locations where the rule of law is weak, or communities are experiencing upheaval, survivors believe that their reports will not be properly considered, prosecuted or acted on. Aid and humanitarian workers operate in places where walking into a police station and reporting sexual assault is not an option.

Humanitarian relief is almost always international by nature, with people working for short periods of time across multiple countries. Perpetrators of sexual misconduct may be working in another country or for another organisation when an incident is reported, or an investigation considered.

The vast majority of aid and humanitarian workers behave ethically; give their heart and soul to their work; and understand that no form of sexual misconduct should go unreported. But we must recognise the challenges that have to be overcome.

It was reassuring to me in my position as commissioner of the ACNC, that in Australia members of ACFID had standards and a compliance regime when it came to protecting staff from harm and from harming others. In Australia, this forms part of a multi-tiered safeguarding system.

On top of their own policies and practice, and their compulsory registration with the ACNC, ACFID’s members working in international development are signatories to the ACIFD Code of Conduct. They commit to the values of the code which include integrity, transparency and accountability, but they must also demonstrate their compliance with mandatory policies and procedures. Safeguarding is paramount.

In the delivery of Australia’s aid program, the Department of Foreign Affairs and Trade (DFAT) also institutes further layers of safeguarding for its partners, including mandatory reporting of children at risk. For NGOs to become major partners with DFAT, there is a rigorous accreditation system. Overarching this, is Australian law and Australia’s extraterritorial legislation which applies to all citizens in relation to child sex exploitation.

Following the reports in the UK, ACFID commissioned an independent review to assess the prevention of sexual misconduct among its members. For those affected by sexual misconduct, it is critical that ACFID and its members listen carefully to the concerns raised; look again at existing safeguards; and go beyond what has been done before to ensure that best practice is being implemented.

For this reason, the independent review not only looks at standards, but examines the translation of standards into practice. It will look at the culture within ACFID’s members in which standards are implemented, as well the organisational capability to implement them.

To inform the review, the independent review team has put in place a confidential reporting telephone and email address for those who wish to report an incident which may not have been reported formally. In addition to looking at reporting in the sector, the review team will also be holding interviews and focus groups with members about how standards translate into practice for staff and will test understanding of key terms and principles when it comes to sexual misconduct. This will be capped by a final report and recommendations for implementation.

In my former position as a regulator, implementing the law and setting frameworks and standards was an important part of my work. But this is not enough. We need a world where people affected by sexual misconduct are empowered to say: “enough is enough” and this can be said within a workplace culture in which it is listened to and there is strong leadership and capability for action.

Gender equality is about power imbalances; power imbalances between aid workers and beneficiaries can also enable exploitation. We need to change this imbalance not only to eradicate exploitation, but because it is a fundamental issue of effective human development. I am determined that we move the needle on gender inequality and the prevention of sexual misconduct and we truly harness the power of #AidToo.

For more information on ACFID’s review, visit their website. To report into the review confidentially, people affected by sexual misconduct can contact the independent review team at the Victorian Institute of Forensic Medicine on 1800-00-PSEA (1800-00-7732) or contact the review team at psea.review@vifm.org.

If you have experienced violence as a result of this issue or know someone who has you can contact 1800RESPECT at any time of day to speak to a trained counsellor. 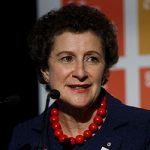