12 December 2019 at 8:43 am
Durreen Shahnaz
After a decade of impact investing, how inclusive is the space? What is the report card on the space and its mission to build a more inclusive market? IIX founder and CEO Durreen Shahnaz shares her thoughts.

Print
Is white liberalism taking over impact investing?
12 December 2019 at 8:43 am

After a decade of impact investing, how inclusive is the space? What is the report card on the space and its mission to build a more inclusive market? IIX founder and CEO Durreen Shahnaz shares her thoughts.

Meeting the mother of your boyfriend is always a nerve-wracking experience. It is even more so when you try to cross racial and cultural boundaries. Rob and I were dating for about a year when he invited me to meet his mother at her house. Rob assured me we had an ally in his mother as she was very liberal and “even dated African American football players” at Duke University in the late 60s. The meeting was a surprise for both sides.

What followed was a scene straight out of the 1967 movie Guess Who’s Coming to Dinner. The weekend was packed full of pictures and conversations about Rob’s beautiful former Caucasian girlfriends – one of whom was even a runner-up for Miss New Jersey. It was also a weekend of endless advice about how I needed to go back to my own country and marry my own kind and not disappoint my parents because interracial and intercultural marriages are doomed for failure. The bottom line was, she knew what was best for me – and that was for me to stay away from her son.

Directed and produced by Stanley Kramer, Guess Who’s Coming to Dinner was a classic depiction of the “extent of liberalism” of self-proclaimed liberal people. The movie showed how liberal parents could not accept the man their daughter brought home because he was an African – despite him carrying all the “right” qualifications and degrees. In some ways the movie and my relationship with Rob’s mother (who eventually became my mother-in-law) is something I never escaped from, regardless of how “qualified” I was as a woman of colour – even as I became the first Bangladeshi woman on Wall Street, a successful serial entrepreneur, and a pioneer in impact investing.

The scene played out again recently when the private equity fund Franklin Templeton (the latest to join the gold rush for billion-dollar impact investing funds) reached out to me to join their advisory board. I thanked them for their offer but pointed out to them that their team and board lacked people of colour, people from emerging markets (where they will be investing), and women. In addition, they needed a more robust impact measurement methodology that incorporates the voices of beneficiaries. If they took care of all of that, I would be happy to explore the offer. In response, I received a terse note withdrawing the invitation. Despite my qualifications in the world of finance and development, my input was not welcome.

Beyond the dinner table

During this contentious moment in history, when society might yearn for the good old days of white liberalism, with its embrace of inclusivity and multiculturalism, I am reminded that at its core liberalism is a one-sided action: Inclusion takes place on terms decided by the privileged, without consideration of those who they purport to include.

There is a spectrum to this behaviour – on the one side a sly talk from the mother-in-law, and on the other an open celebration that is wonderfully captured in the word “caucacity”, first coined by Desus Nice and Kid Mero in the podcast “Bodega Boys” to refer to flagrant displays of white entitlement and privilege. Jenna Wortham highlights in her New York Times piece Seeing Whiteness Onscreen how caucacity also refers to an entitlement that eludes other groups in American society, and becomes the dominant lens through which the rest of society is judged.

These forms of condescension – whether at the dinner table, in social media, or onscreen – were not supposed to come into the very special space that a group of us created 10 years ago called impact investing. Impact investing was intended to bring finance and development together to make the financial system work for the 99 per cent. It was going to put women and disadvantaged communities front and center in capital markets and connect the back streets of the world to Wall Street. It was going to make finance become inclusive once and for all.

But 10 years on, white liberalism rears its ugly head again.

After a decade of impact investing, what is the report card on the space and its mission to build a more inclusive market? Well, it is a mixed one. While many of us are chipping away at the crucial balance between achieving financial and developmental sustainability, new players have entered the space from all sides, with a rush to raise billion-dollar funds and to capture a larger slice of the pie.

This gold rush has resulted in large-scale “impact washing” where both finance and development giants are repackaging existing practices as “impact investing” – be it emerging market investment, ESG, infrastructure projects, multilateral loans or technical assistance funding.

It appears that everything now is some form of impact investing.

If the impact investing market really is in excess of US$500 billion, and it is to be our panacea to meet the United Nations Sustainable Development Goals, then many questions remain unanswered: Why do more than a 10th of the world’s population (766 million people) still live in extreme poverty, earning on average less than US$1.90 a day and not seeing any benefit of impact investing? If impact investing is about being inclusive and bringing underserved communities into financial markets, then why isn’t more happening in the last mile for countries such as Sub Saharan Africa, Asia and Latin America? If impact investing is supposed to bring underserved women to the forefront of capital markets then why is it that only caucasian women are talking about gender lens investing, in which investments intentionally seek to generate positive outcomes on gender equality? And why are they speaking on behalf of women of colour in the first place? If impact investing is supposed to be bringing all the voices of all the ecosystem players together then why does it cost US$20,000+ to speak at any impact investing conference where there is little to no representation from the Global South?

The answer to all this is caucacity. Our beloved impact investing space that was going to work for all and be for all has sadly been infected with caucacity.

Having their cake and eating it too

Among all the new players in the impact investing industry, the one that has the capacity to move the needle in terms of sheer dollar amount are the Private Equity (PE) funds. Thus, this group begs closer scrutiny, and should be held accountable to the fact that they are enjoying their cake (as traditional Wall Street bankers) while eating it too (benefiting from the “do good” halo around impact investing).

Yet here, we see the prime example of caucacity. PE funds can first and foremost demonstrate that they are about impact if they pass the simple test of having representation of women, people of colour, or people from emerging markets on their executive committees and boards. They can demonstrate their expertise in impact by having qualified employees in development, impact investing, or markets where the investments are made.

From a glance at Texas Pacific Group’s Rise Fund (whose founder Bill McGlashan is now facing prison time for ethical misconduct), KKR’s Impact Fund, Apollo’s Impact Fund, UBS’s various funds and the latest Franklin Templeton Impact Fund – one can see some common threads in the constitution and operations of these funds:

All in all, large sums of capital are being committed in the name of development and doing good. In reality, they are chasing the next Impossible Burger. This is caucacity.

If we were truly committed to creating a sustainable and long-lasting impact investing industry that can change the course of the planet, then we need to look into our souls and ask a very hard question: Are we willing to connect back streets of underserved communities to the Wall Streets of the world? Are we willing to embrace the risk that comes with that? If so, who is willing to take that risk? Specifically, who is willing to take on the risk of innovation; the risk of valuing women and the underserved in financial markets; and the risk of giving a voice to the voiceless?

Returning to the story of my mother-in-law: She did slowly come around and shed her caucacity. On her deathbed, she thanked me for showing her the world in a different way and for being patient and kind to her. As for all the do-gooders out there, I know together we can create deeper impact by making the financial system work for the 99 per cent. However, it will be possible only if we have the courage to drop the mask of caucacity, see things for what they are, and work with the possibilities.

Or else, guess who is NOT coming to dinner…. 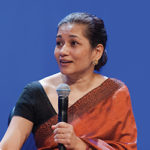