How do we solve a problem like rough sleeping?

5 March 2021 at 3:00 pm
Jenny Begent
If we are to tackle the current housing and health inequalities then we need to assess and meet the needs of people sleeping rough in new and imaginative ways, writes Jenny Begent, head of social mission for the Salvation Army.

If we are to tackle the current housing and health inequalities then we need to assess and meet the needs of people sleeping rough in new and imaginative ways, writes Jenny Begent, head of social mission for the Salvation Army.

This is the seventh of a 12-part series from Housing All Australians exploring the role that housing can and should play within Australian society and why it is important to our economy that we house all Australians, rich or poor.

I am fortunate enough to live in what is considered by the Economic Intelligence Unit (EIU), the most liveable city in the world. Due, in no small part I suspect, to its great coffee and café culture, but also to its healthcare, education, stability, culture, environment and infrastructure.

On the EIU, Melbourne scored an incredible 97.5 out of 100. As a resident myself, I can attest to it being a fine place to live. Yet, from my vantage point at The Salvation Army in the centre of the city, I am all too aware that Melbourne isn’t a great place for all its residents. One of our significant challenges is the increase in the number of people sleeping rough.

According to the Melbourne City Council rough sleeping has increased by 74 per cent compared to two years ago. This represents 247 individuals, most aged between 26 and 60. Most are there due to housing affordability, mental health or an addiction.

Melbourne is not unique in Victoria for its rough sleepers; rough sleepers are present in all our suburbs and in our major towns. It is unique however in the level of infrastructure that exists as a draw for people seeking housing and support. So, like Dick Whittington, searching for streets paved with gold, the homeless, the ill, the abused come looking for support, propelled by a spectrum of problems which includes having nowhere else to go.

This increased presence has meant increased government and media attention, which has, in some instances quite frankly, not been at all helpful when agencies such as ours have been trying to support and assist this most vulnerable group.

Along with increased attention, has been a call for solutions, some excellent, others not helpful. The call for the criminalisation of rough sleepers is extremely counter-productive, leading to vulnerable people being driven underground rather than remaining visible where support can be offered. A great majority of rough sleepers are victims of crime themselves and the calls to criminalise, further stigmatises street homeless people, and penalises them for simply being poor.

The plethora of support agencies, council and government responses have both helped and hindered this cohort. Differing agendas, targets and attitudes have meant that many rough sleepers have failed to obtain the housing and medical support they need to help them make a sustainable return to mainstream society. Until recently there has been a lack of political appetite and bureaucratic capacity for a co-ordinated approach to tackling rough sleeping. However the creation of the Rough Sleeping Task Force has finally been translated into a practical approach that will work towards a state-wide solution, rather than a Melbourne city specific approach.

Rough sleepers are one of the most disadvantaged groups in society. They deserve better than to be treated as a nuisance – they may have suffered a relationship breakdown, a bereavement or domestic abuse. Instead, people need long-term, dedicated support to move away from the streets for good.

Those who sleep on the streets are extremely vulnerable and often do not know where to turn for help. These individuals need additional support to leave homelessness behind, and any move to criminalise sleeping rough could simply create additional problems to be overcome.

If we are to tackle the current housing and health inequalities then we need to assess and meet their needs in new and imaginative ways. It requires a broad overarching response that takes into account their health needs as well as housing needs. The response needs to be undertaken with mainstream providers ensuring effective partnerships across a many and varied service response.

It also requires a response from individuals, a reminder that each one of us is just one step away from homelessness. In the literal sense, as we walk around our own towns and cities and pass rough sleepers, and in the theoretical sense, we could suffer a job loss, an illness, a financial setback or a combination of the three. We could end up sleeping rough; anyone who is on the street is certainly a lot worse off than me. I look them in the eye, I say hello. When I acknowledge them, they are no longer invisible.

This article is part of a 12-part series from Housing All Australians, which intends to draw on a range of perspectives centred around housing and homelessness. We will hear a range of views from business, the not-for-profit sector and hopefully government, as to why they believe housing is an important social and economic building block for Australia’s future prosperity.

Investing in social housing, in the era of working from home 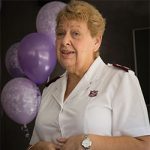 Jenny Begent is the head of social mission for the Salvation Army.